Take to the open sea and make a living as Skipper of your own boat.

You can sell your fish , resupply the boat with buoys as well and upgrade your boat at the boathouse.

Some places are better to fish than others.  Fish prefer the quieter waters away from the harbour mouth so can be found in higher densities if you're willing to travel.  You have buoys to keep track of the best fishing area, but beware the storms that will disturb the fish and blow your buoy's away into the deep blue.

"With the Sea" by Kevin MacLeod (incompetech.com)
Licensed under Creative Commons: By Attribution 3.0 License
http://creativecommons.org/licenses/by/3.0/

Awesome, only faults are the boat speed and the fact that there isn't much to the game.

I agree with other commenters that the game should include some sort of upgrade ladder/staircase.

A possibly upgrade would be a tool to tell you where the fish may be.

This has some potential and it's a really chill game, 7/10

I like the boat art & the coast animation, and you've got some interesting systems set up. The idea is solid. However, I feel like there's too much time spent going from place to place. It ends up feeling kind of dull. I think the zoomed out camera contributes to this, because it makes the boat animation barely visible. I think zooming in the camera and having it follow the boat would feel much more engaging.

You could also add in some more visuals in the water itself, like small islands, visuals that designate clusters of fish, etc. As it is, I feel like there's no direction to head towards -- you just set out in a random direction, fish, and then return. I'm assuming you're working on this kind of stuff already, since it's in early development.

I also had a hard time telling how the fishing worked -- I didn't initially realize that the fish count went up immediately when you pressed space, so I thought maybe the buoys would somehow catch the fish for you.

The sound effects are drowning out the background music -- I can barely hear it.

Hi - Thanks for the feedback.

I plan to do a devlog with a roadmap for the game, as it is I just wanted to get something out for the game jam deadline.  It's maybe not obvious or really necessary as it stands to head too far, but there are higher concentrations of fish the farther south east you head (generally, the spawn locations are randomised within certain areas of the playmap).  It's not necessary to go this far until the you have enough storage to benefit from large fishing hauls.

One thing I'm keen to do is limit the number of upgrades possible on the boat, but then have larger tiers of boats up to fishing trawlers which can pull in large amounts of fish for large sums of cash.  I also would like to have a larger map to play on with variety as you mentioned, but without a mechanic to show the way back again I don't want to implement this as yet, perhaps when I put in that, and a way to upgrade travel speed then I will go with that.

I had also considered a timed animation for fishing, and certainly need a sound effect for it, but have instead gone for a resource limitation.  I do realise that I have glanced over the purpose of the buoys, they are there to indicate points fished in as well as concentration of fish found.

The music vs waves was a design decision.  The music originates in the boathouse and falls off with distance from this, with the intention being to make it feel like you're far from land, partly to hide the fact the soundtrack is not infinitely loopable.

Yeah, I noticed that the fish were somewhat randomly distributed. Do they change over time (say, with each storm) or is it static?

I like the idea of upgrading to higher tiers of boats, and that would translate into faster travel times as well, which would make things less monotonous. Although because it seems like you're going for an upgrade staircase of sorts, you'd want some sort of endgame or end goal to work towards other than "make more money."

A compass on the UI would be a pretty simple way of showing the way back. Maybe you have to buy one from the shop?

As far as the wave sounds -- I think the waves are still too loud. Not relative to the music (That part makes sense now) but just generally speaking.

Each storm redistributes the fish, which is triggered by each resupply, it's supposed to be like advancing a day each time you resupply, though haven't added any visuals to indicate this. The storm chance is supposed to be 5% but my last play tests they've occurred on the first two resupplies.  Not sure if I should be seeding by RNG first. 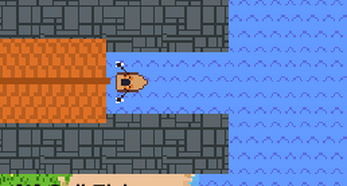 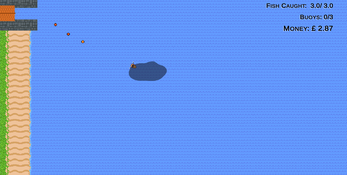